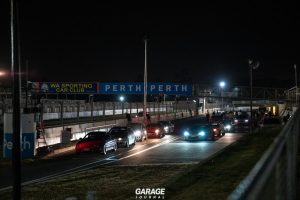 “Circuits are a wild place at the best of times; when you’re pushing hard, they’re a crucible of the finest tolerances, with strict braking zones and minimal run off areas. Time Attack as a discipline pushes the boundaries of this philosophy; the whole ethos of a time attack event is to break records and set speeds seemingly unreachable by mere mortals. One single mistake and you’re out. It’s a daunting proposition.

Infinite Time Attack’s practice nights take the philosophy of ‘competition time attack’ and open it up to the general public. Each lap is against the clock, but the real racing comes down to individual drivers besting their own times, so the atmosphere is constantly focused around development and self improvement.

That being said, the idea of fully sending it around a dark circuit on a fairly chilly October night seemed like something we could get behind. So with the promise of a mixed bag of local cars, we dropped by Barbagallo Raceway to check out some of the metal last Thursday night.

Infinite Time Attack’s practice nights act as the perfect supplement to their weekend competition rounds which attract some of WA’s quickest competition cars, and only runs once or twice a year.

Their Practice Sessions are a bit more grassroots; a ‘run what you brung’ event which takes place every month or so. It’s an open-class track day style event which promotes itself through liberal eligibility for any and all road/raceworthy vehicles, attracting everyone from novices hitting the track for the first time to seasoned racers looking to add some shakedown laps in a competition vehicle to their portfolio.

What’s magic about this format is the sheer variety of metal it attracts across the field. You get everything from 90s Japanese VTEC heroes, to modern German Super Saloons and old Classics, all looking to chase down times and brush up their skills in a safe and open environment.” 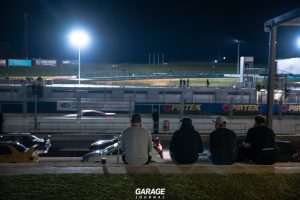